NPS Image Editor is a free, unique image editing program that is perfect for pixel art, drawing, and photo editing. It is lightweight, customizable, and intuitive, yet surprisingly powerful. 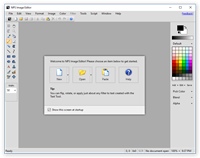 The purpose of NPS Image Editor is to provide the world with an easy-to-use image editing application, while allowing me (as the developer) to learn new skills and further my programming knowledge.

NPS Image Editor started out as a small hobby project when I was 13 years old and was looking for something practical and fun to code with my newfound interest in programming. The original version, then known as "Nookkin's Paint Shop", started as a mess of copy-pasted code – a humble beginning that nonetheless helped me become the programmer I am today.

The original NPS code was heavily modified over the years to produce versions 2.0 and 2.1. NPS codename "Obsidian" started in 2008 and broke tradition by being completely rewritten from the ground up using VB.NET. This has finally been released under the name "NPS Image Editor 3.0" today.

Why use NPS Image Editor if you have Photoshop? NPS actually does not aim to compete with Photoshop as a whole. Rather, it is intended for simpler photo edits, pixel art, and general scribbling – in other words, the things that you would rather not open a large, somewhat bloated application such as Photoshop for. The user interface of NPS was inspired by Microsoft Paint, and thus NPS will be very useful for those who currently use Paint for simple edits and pixel art.

My name is Alexey "Lyosha" Blinnikov. I am a software developer by trade, and in my spare time, I write programs for fun. I run my own website at http://nookkin.com which is the home for my articles, blog, software, and more. As the developer, I use NPS Image Editor almost daily for simple image edits and color manipulations using the advanced color dialog. I hope you have as much fun using it as I had making it!